The ancient history, the King Le Dai Hanh and majestic victories have been become the stories from previous thousand years, but it still make people so moved when they come to visit here.

Enter the main gate of Bach Dang Giang cultural and historical relic, Trang Kenh Vong De temple is the first temple where visitor can come in the complex of temples and pagodas here.

The temple worships King Le Dai Hanh, whose re-created the second Bach Dang victory in 981. He had contributed to defeat the Tong and Champa armies and built the powerful Dai Co Viet dynasty. There is a poem to praise his merits 92 days and nights were also the time to dig mountain and build temple, create a religious cultural architectural space at the Trang Kenh Vong De temple. The temple was started to build in July 7th, 2009 and inaugurated in October 6th, 2009. It has 3 main halls, 1 back room. This is a spacious and solemn, harmonious and poetic architecture.

The back room is built by ironwood. The visitors will be impressed by the gold-plated bronze statue of king Le Dai Hanh. The statue is 1 meter 76 and weighs 1.2 tons. On the right side are the altars of his father, his mother and his ancestors. On the left side is the altar of queen mother Duong Van Nga.

The 3 main halls are the worship places of generals and warriors... every detail of carvings are newly, spaciously but deeply carry the Vietnamese cultural.

In front of the temple is a large yard about 300 square meters, surrounded by stone walls. The temple gate is built by stones with sophisticated patterns.

Specially, in front of the temple’s gate is a thousand-year-old banyan tree. Legend said that before Saint Tran go to defeat the Mongolian invaders in 1288, he prayed King Ngo Quyen and King Le Dai Hanh to strengthen his troops.

Annually, on the death day of King Le Dai Hanh (the March 8th) and inaugural day of the temple (the lunar August 16th), Trang Kenh Vong De temple organizes a big celebration for people and visitors come and express their admiration

Besides, In the campus of the king Le Dai Hanh temple, on the left side is the temple of general Le Duy Mat - a prince of the Hau Le dynasty, who devoted all of his life and his family for his ideals and poor people. 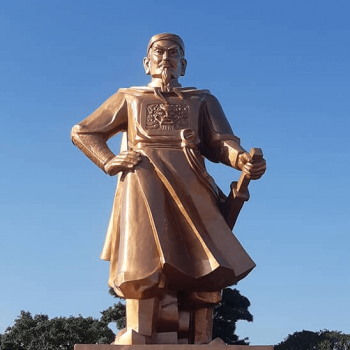