This place gathers the earth and sky quintessences which have formed the Vietnamese strength.

In Vietnam, there are many temples where worship Quoc Cong Tiet Che Hung Dao Dai Vuong Tran Quoc Tuan, he is a talented general, who had led Dai Viet army and people to defeat the Mongolian invaders with 3 illustrious victories in the 13th century. He was honored as one of the world’s best military generals, and honored by the Vietnamese as Tran Saint. Trang Kenh temple in Bach Dang Giang relic site is a special place to worship him. Start to build from October 7th, 2008 on his 800th birthday. After 99 days, Linh Tu Trang Kenh temple was completed with highlights in scenery and architecture.

Triple gate is 10 meters tall, built by solid stone with skillful patterns - patterns of the brilliant Dong A culture.

The temple is built from ironwood with 1 back room and 3 main halls.

The statue of Tran Saint is located at the back room. It is casted by bronze, 1.6 meter high and weighs 1.2 tons. On the statue’s sides are the altars of ancestors.

Annually, Trang Kenh temple opens a seal opening festival in the 14th and 15th of lunar January, his death anniversary celebration in the 20th of lunar August and inaugural ceremony of the temple in the 14th of lunar December, attracting a great many visitors.

Coming to Trang Kenh temple, amid the sacred space of Bach Dang Giang relic site, people show deep gratitude to the great merits of Tran saint, knowing that his legacies were the guerilla attacks and entire people’s unity strength. 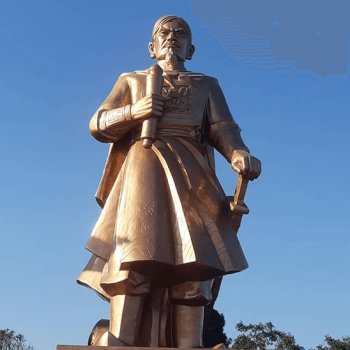