Thinking of Uncle Ho (President Ho Chi Minh) makes me feel brighter. Wherever marked Uncle Ho’s vestige gathers the Vietnamese spirit and cultural quintessences, the people’s aspirations to wish for finest things to assure the people and keep peace. President Ho Chi Minh temple in the Bach Dang Giang cultural historical relic is the first temple worshiping him in Haiphong and the northeastern part of the nation.

President Ho Chi Minh was honored by the world as the national liberation hero, pre-eminent cultural celebrity of the human being. The Vietnamese people honored him as the national father, a saint. Uncle Ho always gave a great sentiment for Haiphong with 9 visits to the port city. He named Haiphong as the “ loyal and determined to win city”. To show the love and deep gratitude of Haiphong residents for his worshiping place, president Ho Chi Minh temple started construction in September 2nd, 2015 and inaugurated in December 12th, 2015 by socialized sources.

From the outside, president Ho Chi Minh temple impresses visitors with mansard roofs designed in the shape of lotus flower, the national flower symbolized the finest.

On the temple gate is the national emblem of the Socialist Republic of Vietnam, under the emblem is the words “ CHU TICH HO CHI MINH “ (President Ho Chi Minh). On the two sides are the parallel sentences :” Unity, unity, great unity, success, success, great success”. These are the endless truth bestowed by Uncle Ho.

Uncle Ho worshiping temple was built in the complex of temples and pagodas in the Bach Dang Giang historical relic. It demonstrated the idea of building a relic which has both historical and era significance, proceeds the historical flows from the dynasties of the Hung kings to the Dai Viet civilization and the Ho Chi Minh era, for today and future generations. 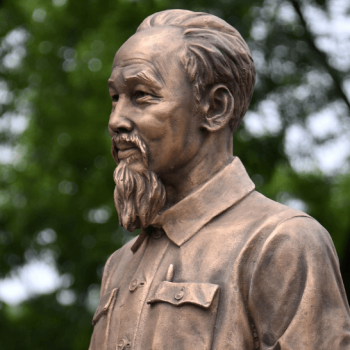